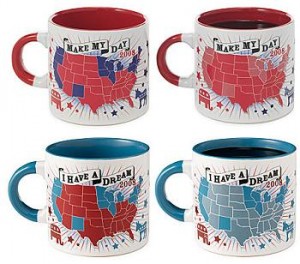 Wouldn’t it be nice if everyone voted just like you? Maybe not, but I know at least a few election-addicts who see the world in blue and red. These election day-themed mugs display the political geography of the US in democratic blue and republican red and they change colors when hot liquids are poured in. The neutral for both mugs is the same, but the red states become blue in the democratic “I have a dream” mug and vice versa in the “Make my day” mug. One of each would make a great set and would probably start up some interesting breakfast conversation!

If only changing minds (and votes) were as simple as pouring a cup of hot coffee into a waiting mug!